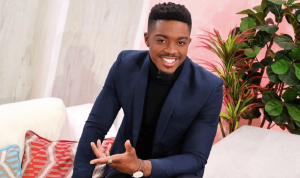 Tinotenda Chinyani known for short as Tino Chinyani is a South African, below we have some of his information like; biography, age, wife and net worth

As stated above, Tino Chinyani has his full name as Tinotenda Chinyani, he is a South African super model and also doubles as an actor and a TV personality.

He is not really a South African, but a Zimbabwen, he was born in Zimbabwe but later relocated to South Africa after matric inorder to complete his studies, after which he started up as an entertainer where he gained fame.

If you are wondering how old is Tnio, do not worry as we have the correct information, Tino is 25 years old, he was born on 9th of September 1994, he will clock 26 by September 2020.

The South African model attended St. John’s prep, then he finished up his college at St. John’s college. Then in college, he was just a star boy, apart from being the deputy head boy, he was also engaged with other activities as he was then the basketball captain, he also represented u19 Zimbabwe rugby, and also he was among the interact society.

He is a graduate of Marketing & management and attended Monash University.

In case you are thinking if Tino Chinyani is married, yu may be a little wrong. He is not married but has a girl friend who he has been dating for sometime.

The young lady’s name is Simz Ngema and they are both expecting a new born. You may want to see Simz Ngema’s baby bump on Instagram.

Four years ago, the young man was signed with Boss models, then he began his journy to fame, he debuted in campaigns for some major companies in South Africa like Polo, Garnier, Axe, Edgar’s, McDonald’s etc to name a few.

He also appeared at the MTV VJ search, subsequently he was made the co-presenter for the popular entertainment channel, Channel O for the top 5 drive and currently he is the host on the Morning Show on the TV channel, ETV.

A year after, he was voted as the third most influential student.

Tino Chinyane is currently active on Instagram and you can catch up on him via @tino_chinyani.

Stay with us on HiphopAfrika for more updates.