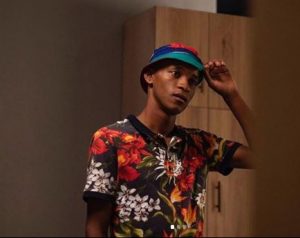 A quick glance at the biography, net worth, age etc of South African celebrity Sicelo Buthelezi who starred on Gomora movie.

Sicelo Buthelezi is a South African celebrity who was born in Tembisa, Johannesburg South Africa.

He is a professional South African actor and celebrity. He became quite popular when he featured on a SA TV series, Gomora as a cast known as Teddy.

The movie Gomora was aired on March 30th 2020 via the movie channel Mzansi Magic.

So far, Sicelo’s salary is yet to be ascertained and also his net worth is not yet confirmed but since his major movie is Gomora, which was aired from March 2020, his networth may not be above R100 000.

Though he became popular not quite long ago, but some info about the celeb is yet to be put together as he still keeps some information away from the public, like his date of birth, however, in our estimation, we may say he is in his early 20s.

He was given birth to in a village named Tembisa in Johannesburg city where he was raised.

Sicelo studied in his home town, Inqayizivele Secondary School where he began to have interest in movies and acting. During his grade 10, he joined a local theater to harness his talent.

Just this year, the SA citizen got himself a role to act as Teddy in the popular crime series titled Gomora.

He played the character of the child of an alcoholic mum who happens tom be Zodwa.  On the series, he suffered many difficulties in school due to his mother’s addiction to alcohol.

He failed his grade 9 exams twice before passing through.

When he could not continue with his mum, he was adopted by a couple Gladys (who acted as Thembi Seete) a social worker, and then Melusi (who acted as Zolisa Xaluva),

So far, fans and even other celebrities have been talking about the artiste, and it seems like he is loved by all.

Not long ago, Miss South Africa by name Zozibini Tunzi, also gave a shout out to his performance as Teddy.

The tweet says; “Please tell Teddy that he’s a fave,” Zozi wrote to the producer of the movie Kutlwano Ditsele.

In an interview, the actor revealed that he is not yet acquainted to fame, as some aspects of his popularity are yet to be handled efficiently.

He also revealed that he also denies being Teddy from the movie when ever someone on the street randomly asks him if i was him, he said he will always answer that he looks like the main character on the movie.

He further stated that during this lock-down, he has let his beards grow, making it easier for people to believe him when he says he is a look alike with the main actor.

The movie itself is growing to a household name, and is currently being played on Mzansi Magic telenovela.

On the movie, he acts as a young man who has some special needs, and tried his best to relate to people that disabled people are still same with other normal people.

He recently went on his Instagram to reveal that he is back to screen since Telenovela shooting is currently on hold because of the pandemic.

His fans on Tweeter also showed him some massive support for his intelligent display of character as Teddy.