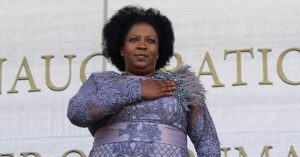 Here we have interesting facts about Refilwe Maria Mtsweni, like her date of birth, career, family, profile etc.

Refilwe Mtsweni is the 5th Premier of Mpumalanga, since 20 March 2018.

Refilwe Maria Mtsweni  is another South African female celebrity. Her fame actually came because she was into entertainment but because she is a politician.

Yea, you read it right, there are many wonderful female politicians in South African and Refilwe is one of the popular and known ones.

She was born in the village of Lynnville, Mpumalanga, then she spent her childhood days at Lynnville, Emalahleni, there, she attended her basic education education. She completed her secondary education in Atteridgeville in Pretoria.

The prolific female politician was born in 1973, pinning her age at 47.

Refilwe Mtsweni got a diploma in human resources from the popular South African technical university, Tshwane University of Technology, she also later bagged a certificate of governance and leadership from another university by name University of the Witwatersrand.

So far, Refilwe Mtsweni is currently married and has two children.

In June 2014, she was made or rather appointed to serve as MEC for Coperative Governance & Trad. Affairs.

Political luck has been on her side as the ANC made it official that Mtsweni had been nominated to become the next Premier of Mpumalanga on 14th March 2018.

She became the Premier-elect until the legislature subsequently confirmed her position on 20 March 2018,  Mtsweni was officially inaugurated the same day, 20th of March by Judge Francis Legodi the President (Mpumalanga High Court division).

It is also important to note that she is the first female to assume the role.

Just last year, after the May 2019 elections, ANC akak African National Congress revealed that it still confirms Mtsweni as the current Premier of Mpumalanga.