Let us have a look at the biography, 2020 net worth of the Skeem Saam star, Noah.

Well, for a start, Noah is a South African born and brought up youngster who delved into film acting, he also is a producer, photographer and still boasts as a male model.

He is currently based in Gauteng. His real or biological name is Austin Rethabile Mothapo.

No legitimate estimation has been made concerning his net worth, but our own assumption is that his net worth is about 50,000 rands.

Austin acted out as ‘Noah‘ in the popular TV series named Skeem Saam.

He has become so known and one of the best and notable characters on the popular SABC 1’s tv series named Skeem Saam.

On the movie, he plays acts as Mokgadi Maputla’s disturbed son who was taken away from his mum, as such he was just a young boy. However, his grand mother was just acting to his interest as she just wanted to protect them both. As at the time, Mokgadi was just 15 years (in the movie).

Apart from his acting career, he is also serves as one of the Audi’s brand ambassadors in South Africa.

The 22 years old entertainer has recently completed his university education, he obtained his degree at the popular Technical university named Tshwane University of Technology.

It is said that he attended his primary and secondary education in Gauteng. 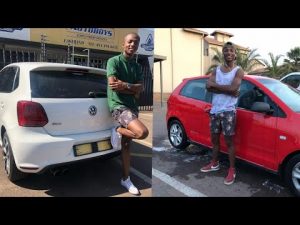 Above we have images of him standing close to his flashy cars which he shared on his Instagram account.

Stay with us to get more celebrity biography and net worth.