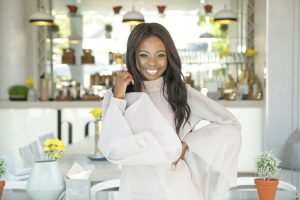 Nambitha Ben-Mazwi is a female South African, on this page we will talk about her biography, date of birth, career and other interesting facts about her.

Nambitha Ben-Mazwi is a well respected South African actor, Radio and TV person, MC, and anchor. She became a popular figure when she started to act  as Shado on one of the popular series on Etv Soapie  series, Scandal and also when she debuted on same Etv Broken Vows as Lulama.

She is usually referred to as Lady Nam, and her acting career exceeds local and has featured on some international films too.

She was born on ist of December 1988, in Eastern Cape in the village of Port Elizabeth. So, she is 31 years old.

The South African female actress had her humble beginnings from her birth place Port Elizabeth, where she found love and passion for The Arts, through her hard works, she was given prominent parts to play in many productions and she already spent a good number of years in United States working at media outlets.

She once was landed with a spot on a TV show named primetime live talkshow named Viewpoint which was hosted by John Fugelsang, on the show she aired her views about the future of her country, South Africa, and also the life and legacy of one of it’s heroes Nelson Mandela.

Seven years ago, she returned to South Africa and she yet continued from where she stopped, she went on with her first Hollywood movie production, a Netflix TV hit movie “Black Mirror”, she remade it to fit a role in the international BET creation of “Madiba”.

Locally Nambitha debuted in the Mzansi Magic crime series named “Doubt”, the movie made her to get nominated for the coveted YOU outstanding favorite actress.

Four year ago, June 2016, the female emcee yet announced her coming back to presenting as she began to work with SABC 3’s show The Weekend Edition, she then worked as the travel insert host, just last year she got what me may call her biggest role yet in the recent eTV primetime telenovela by name Broken Vows.

Stay with us for more updates on Hiphopafrika.