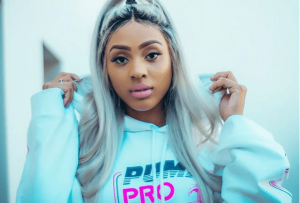 Before we jump into the new update we have for you, let us take a time out to say that we are glad that our first blog post is airing and you are able to read it.

So, today we have a good gist for our fans.

South African female artiste named Nadia Nakai has revealed that she is currently in the studio with Reebook and Victoria Beckham, keep reading to know if it is a single or an album.

Just before we go into details, let us introduce you to Nadia Nakai.

Nadia Nakai Kandava is the biological name of the South African born and bred female artiste. She is a prolific singer and song writer whose work of art has been speaking for her the music industry.

The female emcee was born on 18th of May 1990, and lest we forget, she celebrated her birthday just some weeks ago and it was a memorable event.

Her musical career has been a successful one as she has many songs and other few but great projects to her name.

She was previously signed with a record label headed by Cassper Nyovest which is called Family Tree, though she has parted ways with the label to introduce her own record label.

After being signed to her own label named Def Jam Africa, Nadia Nakai revealed that she was going to an isolated place to work on her next project which she did not disclosed much about.

Just recently, we got to know that the coming project is Reebok’s. Then, it was not confirmed, but today we have more information about the project.

Some hours back, Nadia Nakai finally talked a little bit more about the project. She revealed the promotional campaign done for Reebok and Victoria Beckham.

She currently models for the newly birthed clothing line, Rebook which she shared the pictures on her Instagram, and the company’s merch is currently in stores.

It’s getting so cold… @reeboksouthafrica is coming with some amazing winter threads soon! Announcing their major collaboration soon! Watch this space! ALSO I’m so inlove with @realblackcoffee new song featuring @sabrinaclaudio SBCNCSLY! Had to edit this video to it!