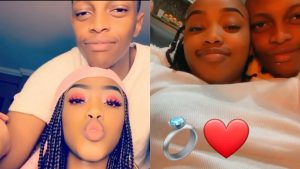 Dj Melzi is a South African amapiano Dj and producer who is known to be dating a young Instagram celebrity, Andiswa Selepe.

We have been trying to figure out the motivation behind the release of the upcoming EP, other questions we ask concerning the new coming project are;

The Bomb an Amapiano Album?

Who will feature on the coming project?

Will the project be dropped on 11th December as said?

Will his girlfriend Andiswa in any way feature in the album?

Well, what ever it is, the answer t these questions and more will be unraveled as we approach the official release date.

You can actually read in full about Dj Melzi Age, Girlfriend, Biography, Net Worth 2020, How old Is Dj Melzi.

Also, you can check out the full details about his girlfriend Andiswa Selepe Tshabalala Biography, Net Worth, Age, Surgery thebomb.rsa.

The EP title “The Bomb” may have been influenced by his girlfriend’s IG name Thebomb RSA and the fact that Dj Melzi engaged his girlfriend just a month ago.

Stay with us, to download or stream the EP mp3 when it drops.

The Bomb will be available for Pre-Order from December 4th, 2020.

Some of the songs already released by Dj Melzi include;

The songs were lifted from his previous album, Eighteen released when he was 18 years old.